How Air Conditioning Changed the World

Before the advent of air conditioning, there were ways of cooling buildings for millennia. Ancient Egyptians hung damp reeds over windows and put water-filled pots in hallways. The Romans gathered snow in donkey carts and stored them in pits for the summer. In the Middle East, wind towers and underground water channels were used to channel cool breezes through homes.

Efforts to cool down in the U.S. a couple of hundred years ago were quite primitive. For example, the early 19th-century businesses of New England shipped large carved ice cubes insulated with sawdust around the country. New England literally exported ice the way Georgia exports peaches.

Inspiration for the Invention of Air Conditioning

What would later spur the invention of air conditioning was the preponderance of humidity and not so much heat. The location was Sackett & Wilhelms Lithographing & Printing Company in New York City in 1902. The problem was stifling humidity that damaged their paper and ruined their prints. What they really needed was a humidity-control system.

That’s where a young engineer named Willis Carrier comes in. Carrier devised a system that circulated air over coils that were cooled by compressed ammonia. This machine worked perfectly and reduced the humidity and allowed New York’s lithographers to print without concern of sweaty pages and runny ink.

Carrier carried this even further as he recognized that a weather-producing device to control humidity had more potential to control heat. He would mass-manufacture the first modern air-conditioning unit at the Carrier Corporation is now one of the largest HVAC manufacturers in the world.

By 1922, Carrier had created the safer, smaller, and more powerful Centrifugal Refrigeration Compressor, the predecessor to modern air conditioning.

Air conditioning reshaped the world! Cities like Singapore and Shanghai can be stifling places to live when it’s hot and humid. But today they are global metropolises. There is an argument to be made that air conditioning has made us more productive, with studies indicating that human productivity peaks around 70 degrees.

Air Conditioning also changed architecture in profound ways. Skyscrapers and other tall buildings — previously difficult to ventilate because wind increases with altitude — were now a viable option, as were glass-fronted skyscrapers. In the postwar era, smaller domestic air conditioning units started to become available. As a result, between 1962 and 1992, the proportion of U.S. homes with air conditioning jumped from 12 percent to 64 percent!

And in the U.S., the proliferation of air conditioning units changed this country’s demographics. The Sun Belt — spanning from Southern California to Florida — boomed from the 1960s to the present. As hot summers became more tolerable, people and industry moved to the Sun Belt states in droves.

In order to put the heavy reliance on air conditioning in the U.S. in perspective, today, a U.S. household is more likely to have central air conditioning or a window unit than it is to have a dining room, garage, or even a dishwasher. The U.S. consumes energy for air conditioning more than the rest of the nations in the world combined.

This technological innovation in weather manipulation was described in an edition of Life Magazine in 1945 as a prewar luxury that was being manufactured in large quantities and sold at a moderate cost in the postwar mass market.

Air Conditioning radically reshaped how people live and work in other countries across the globe. According to recent estimates, approximately 90 percent of Japanese houses are air-conditioned. China has at least 35 percent of the world’s air conditioners. The invention of air conditioners also led to the development of mega-cities, such as Singapore and Dubai, which had previously been very inhospitable climates.

Population shifts were another outgrowth of Carrier’s air conditioner. In 1950, fewer than 500,000 people lived on the southern coast of the Persian Gulf. Today, it is home to 20 million. Similarly, in Saudi Arabia, 70 percent of electricity is used for air conditioning. Blackouts are common in India, and they are blamed on the new air conditioning units of the middle-class.

As it pertains to human productivity, air conditioning appears to have tangible advantages. Economist William Nordhaus discovered as recently as 2006 that the hotter the climate, the less productive its people. A study of U.S. government typists back in the 1950s found that typists do 24 percent more work if temperatures are kept low. Factories, offices, and server farms that power the Internet all rely on air conditioning. It would appear that the world economic system depends on air conditioning.

With hotter temperatures just around the corner in the Tri-Cities, now is the time to purchase an air conditioning unit for your home. Already have one? Get it checked to ensure it is in optimal condition!

Contact your premier source for heating and air conditioning in Washington, Oregon and Idaho, Apollo Heating and Air Conditioning, at (509) 396-COLD (2653)! 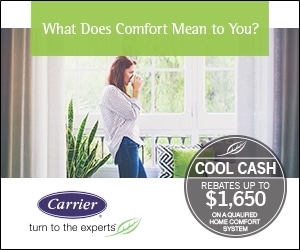